We are the Ukrainian resistance. https://sprotyv.mod.gov.ua/ The site was created by the Special Operations Forces of the Armed Forces of Ukraine to support and coordinate all those who want to fight for the liberation of our land from the Russian invaders. Together with the Armed Forces of Ukraine, we will imperceptibly destroy any enemy who has come to our country. We will do it where he doesn’t expect it, where he feels supposedly safe. We will teach you to conduct reconnaissance and transmit data about the enemy. We will tell you how to effectively carry out non-violent resistance, because sometimes there are situations when there will be no weapons in your hands. You will learn how not to leave traces on the Internet, so as not to have problems with the occupation police. Now you will know how to provide first aid to the wounded. Yes, we are fighting a strong enemy, he outnumbers us, he can temporarily capture this or that city. But he will never be able to keep him, because we will be waiting for him in every house. And we will liberate every meter of our land, step by step.

Together we will turn the lives of the occupiers into hell! Join in! 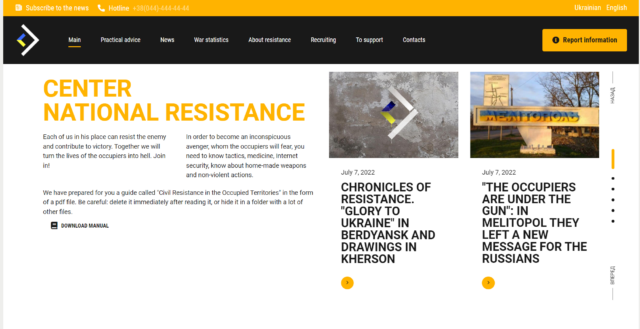