At a stop near the village of Dolinka (Kuchuk-Mamchik district) in the occupied Crimea, interesting messages were left for the occupiers.

On the peninsula, there is an increase in the activity of the Ukrainian underground, so it should not be surprising if the inscriptions “Glory to Ukraine” become not an isolated case despite the repression of the occupiers. 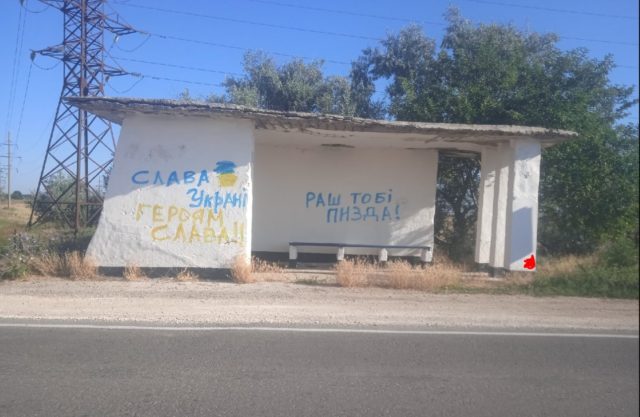 It should be noted that the Center of National Resistance has already reported that Ukrainian songs are being played en masse in the streets of the Ukrainian Crimea.

It will be recalled that earlier in Sevastopol leaflets for the Russian occupiers were distributed. In them, the Russians warn that the city is against the war and local partisans know where each occupier lives. Therefore, the enemy will answer for war crimes in Bucha, Irpen, Mariupol and other cities.

previous
IN ONE OF THE VILLAGES NEAR BERDYANSK, A RUSSIAN FLAG WAS BURNED
next
THE OCCUPIERS CANNOT FIND TRAITORS IN MELITOPOL